You are here: Home / Blog / Planning and shooting the full Moon behind The Danish Royal Hunting Lodge

Inspired by lots interesting compositions of the Moon together with the landscape of Earth, I decided to give it a try myself.

I had an idea of the Danish Royal Hunting Lodge in Dyrehaven North of Copenhagen in front of the huge rising Moon – but I didn’t know if it was possible to shoot it or how to plan it – so I set out on a quest to learn something new within photography!

My prerequisites were primarily that I had a camera and a zoom lens and an unsteady tripod!

Also I knew this:
If you zoom in on objects being behind each other, then the object the farthest away becomes relatively larger than the object in front – more so the farther apart the two objects are spread apart!

I knew I had to be as far away from the castle as possible, but within clear sight from it – and within the limits of my zoom lens, of course.
I also knew that the Moon – like the Sun – rises in the east and sets in the west.

Luckily there is about 1-2 km of clear and almost treeless view to both the East and West of the castle – but with woods both to the North and South of it.

The Eremitage Plain to the East of the castle

The Eremitage Plain to the West of the castle

There were three things I remained to investigate:

To the fist question, I already knew, that from the castle and to the East there’s a gentle and steady fall in terrain until the sea about a little more than a 1 km away but with the railway line crossing a little less than 1 km away.
To the West of the castle the perimeter is about 1,5-2 km away and the area with open land is wider, but there are multiple terrain variations as well as small groves of trees spread out all over. I had to investigate these closer to get a better understanding of my possibilities – so I went out there scouting a few days prior to the upcoming Full Moon!

Before heading out, I had taken some pictures of the Moon from home, and had found out that even with my 300mm zoom lens the Moon didn’t fill out as much of the frame as I had hoped for – but it did when I photographed it through my small telescope! 🔭

So I borrowed a kids trolley from my brother and brought the telescope with me to Dyrehaven one afternoon.
It did draw some attention, strolling on the plains of Dyrehaven with a night sky telescope in the middle of a cloudy afternoon 😂

Unfortunately the perimeter of the plain to the west of the castle didn’t have as clear a view as I had hoped for – actually I couldn’t even see the castle from the entrance due to a hill – so I went to the top of the hill, but there were yet another (smaller) hill in the way, so I went to the top of that hill – and then the line of sight was clear!!
So I packed out and setup my telescope there – still in the middle of the day – and took a picture of the castle from the top of that hill.

As you can see in the photo above, there were actually still yet another hill some couple of hundred meters in front of me. I didn’t want to go to the next hill, as my plan was to stay as far away from the castle as possible, and then get near it by zooming – to get that effect with the large Moon I was in the hunt for. To the left of the road is one of the aforementioned tree groves.

Before moving on, I took the same photo with phone to have my geolocation stored, so I could later calculate the distance from that location to the castle (my DSLR camera doesn’t have GPS).

Still same spot and iPhone but with max (digital) zoom

I later calculated the distance between the castle and my location to 950 meters – so that could potentially work – but didn’t like the hill in front of me and neither the trees to the left of the road, as they didn’t leave space for any manoeuvring, and there’s something wrong with the balance in the image too. The Moon could potentially rebalance the image, if in the air above and to the right of the castle – but I wanted the Moon behind the castle; not above it…!

Anyway, I still didn’t know the relation between the Moon and the castle, so I called it a day, and went home and played with my images in Photoshop.
At the first Full Moon after buying the telescope I had taken a Full Moon picture with both the same camera and the same telescope – so by combining that photo with the photos just taken of the castle, I would be able to get an approximation of the relative sizes. I then knew the answer to my third question; the relation between the sizes of the castle and the Moon!

I still needed to find the answers to he second question; when the Moon would be behind the castle (if ever) and whereto I would have to move, to get it in the position I wanted.

I had just heard about The Photographer’s Ephemeris and thought I’d give it a try – so I started out using their web version, but later downloaded it as an app to my phone too.

The Photographer’s Ephemeris could tell me, that if I moved as far north (left of the road) as possible, I could maybe get my shot of the Moon behind the castle.

This is how TPE works: 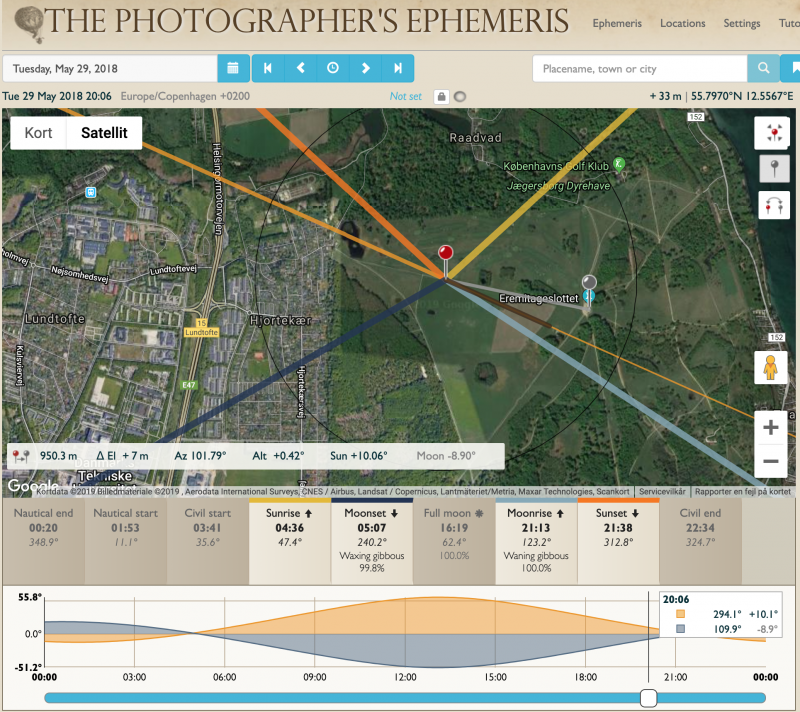 And here it is – my new location – on the other side of the golf course! 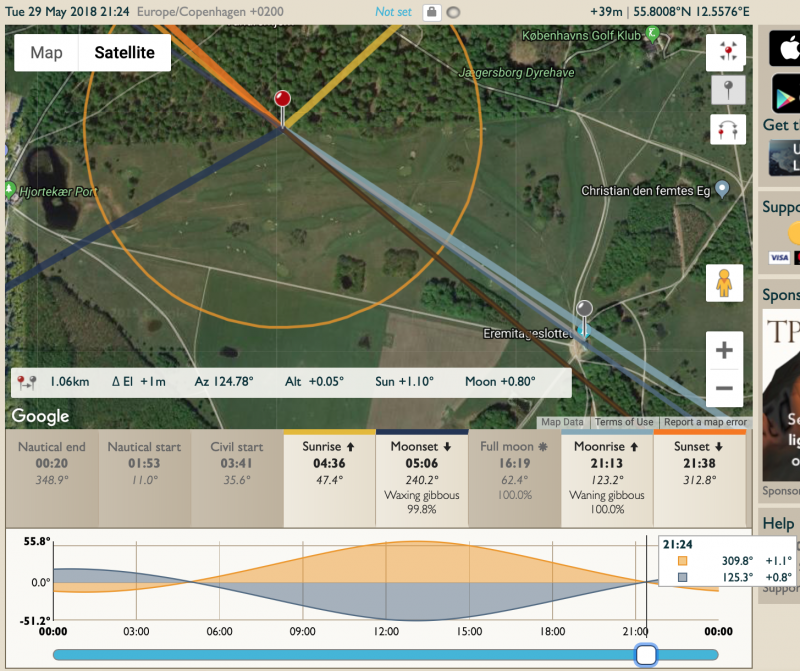 In the above screenshot the 2 azimuth lines are exactly on top of each other – and the Moon is 0,8º above horizon which I estimate to be enough. It also clear that at that time – 21:24 – the sun is also still above horizon, and thus should cast a nice redish glow on the Moon (which in itself will be red too because it’s so low above horizon). And finally important to note too, the red pin’s altitude is 39 meters and the grey pin’s altitude is +1 meter or +0,05º

Next step – in this case – were to go out again and to a little more scouting:

After I finally decided on my shooting spot, I checked the mobile app version of The Photographer’s Ephemeris – because it provides the possibility to simulate the upcoming situation in augmented reality (AR).
Below to the left is a screenshot of my phone with the Moon and it’s path above the castle approximately 25 min after it is expected to be visible over the horizon – and to the right is the actual Moon a few days later (but from a slight different position). 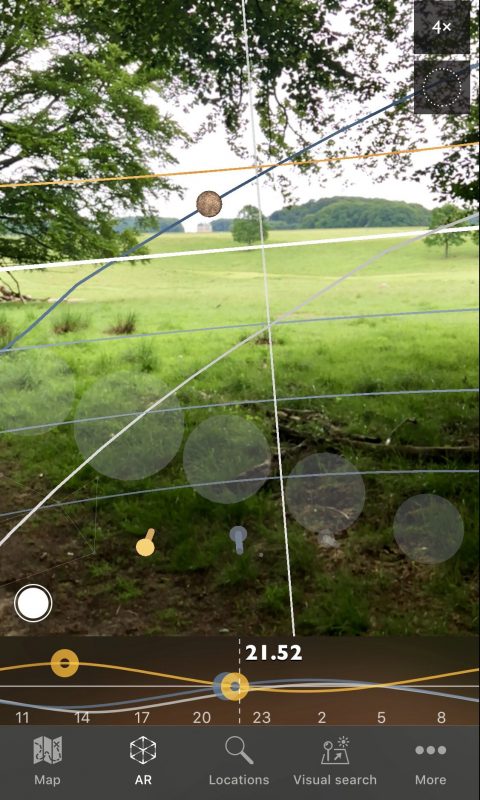 Moon overlay with TPE’s AR
to verify the expected path

All that remained were to hope for good weather at the evening of the Full Moon and await the day! 🙂

On the evening of the planned Full Moon, I headed out to Dyrehaven well in advance to setup the equipment and do some final test shots.

My location for the shooting – 1 km from the castle

I didn’t actually expect anything to happen just at the time of the Moon Rise, as I knew the castle is located on a hill (above horizon), but I didn’t know if I could trust the altitude indications (the castle’s 40 meters altitude seemed too much and I felt being more than 1 meter lower) – and thus I didn’t know if my calculations were precise enough…

Moon rise exactly where it was calculated to occur!

I checked the result between each exposure and adjusted the exposure times a few times to better capture both the Moon and the surrounding landscape with the castle.

Full Moon rising as planned between woods and castle.
I didn’t notice the airplane until I got home 🙂

At 21:23:29 the Moon was about half way up and had stared to moving behind the castle – I thought it moved faster sideways that up, so I started to get worried that it wouldn’t rise enough to be visible above the roof, but maybe instead be completely hidden until reappearing on the other side of the castle, so I increased the intervals between shots, to at least get something…!

The Moon almost hidden by the castle – should I move my setup?

In the end I didn’t dare to stay, and quickly detached my computer (which was only used for focusing) and moved the telescope 20 meters to the side, to make sure the Moon would rise perfectly up along the photographer’s left side of the castle and stay visible at all times!!

New location after moving the setup a bit

At 21:30:11 a couple crossed the golf course and I thought it could have been a cool shot to focus on them and have the castle and the moon unfocussed in the background – but I didn’t dare to move the focus and spend time to refocus afterwards as I didn’t have autofocus at my disposal, so I left the women unfocussed…

A couple crossing the golf course in front of castle and the rising Moon.

At 21:31:39 the Moon had risen to the top of the roof and was placed perfectly around the chimneys of the castle – it was neat, I thought, however there were some misbalance with empty space on one side of the castle and the woods on the other side…

The Full Moon was still behind the castle, but most of was now visible, and having both the castle and the Full Moon in two of the the Golden Ratio lines made this image my preferred photo of the night!

At 21:33:30 the Moon was completely free of the castle, but it continued a nice path just above the tree line of the woods, so I continued shooting a while further, and at 21:35:19 it almost looked like the Moon was a ballon attached to one of the trees.

Finally, by 21:36:04 the Moon was completely free of the woods continuing it’s known path up into the sky and at 21:57 I packed up my gear and headed back to my car.

The Full Moon as a ballon attached to the trees

The Full Moon free of the last trees in the woods

Back in the car I started to itch everywhere, and when I was back home the reason was apparent…

As mentioned, I sent in the preferred photo of the night to the Scandinavian magazine Digital Foto, and it was rewarded Readers Shot Of The Month in June 2018 😃

The preferred shot of the day!
The Full Moon of May 2018 rising behind the Danish Royal Hunting Lodge.

It was great to get the acknowledgement in Digital Foto, but the biggest excitement was to see the Moon actually rise over the horizon exactly where planned (and hoped) for – and it felt like a great victory that the idea and the planning, all came together really well – not to mention the clear sky on this beautiful and warm spring evening of May’s Full Moon 2018 👏🔭📸🤩

I was definitely worth all the mosquito bites!!! 🦟🦟🦟

This site uses Akismet to reduce spam. Learn how your comment data is processed.