You Are Here: Home / Startrails / Startrail in Olive Grove on Greek Symi 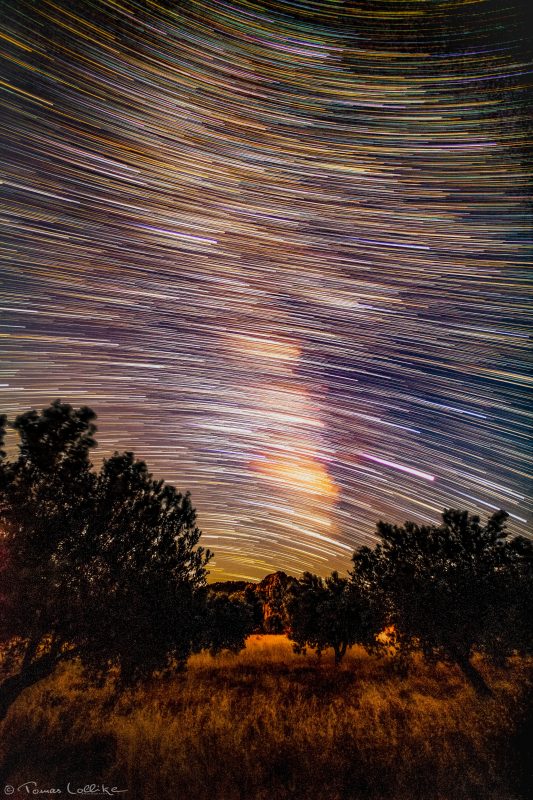 This photo is actually the same image as one of the other photos I took of the Milky Way on the Greek island of Symi in the summer of 2019.
The difference however is that this photo comprises of many more “sub photos” than the other one – and especially the post-processing method differs!
The resulting image is made from combining 162x20sec photos (+143 darks frames) and was processed and assembled in Adobe Lightroom and Photoshop.
The result is a so called Star Trails photo.

The thick prominent white single star trail glowing purple to the lower right – just above the trees – is our planet Jupiter shining up (and Saturn is also more prominent than the stars, a little higher up the left)!

The interesting, I think, is that this photo is taken in a South-Westerly direction (opposite to other Star Trail photos which are mostly taken straight North or South). The result is that the Celestial Equator becomes visible!

The latitude of the celestial pole (for us in the Northern Hemisphere; the North Star) is equal to the observer’s latitude, and thus the angle between the Celestial Equator and the Meridian is equal to the 90 minus your latitude – in this case where the photo is taken in Greece at 36° latitude, the angle of the Celestial Equator and the Meridian were 54° (90-36=54).
The Meridian is the line going from North to South through Zenith (the point vertically straight above you).

For the Longitude; the Sun is at it’s highest point in the sky at 12 Noon, and at some point it was decided that Greenwich near London was important enough to get the first position: 0° (which is why we have used Greenwich Mean Time (GMT) until recently). As the Sun takes 24 hours to “go 360° around the Earth” it moves 15° per hour – and that’s the Longitude!

Finally the Ecliptic Plane and the Celestial Equatorial plane intersects each other in the imaginary line between Earth’s placement around the Sun at the Equinoxes.

So now you will never get lost on a starry night! 😀