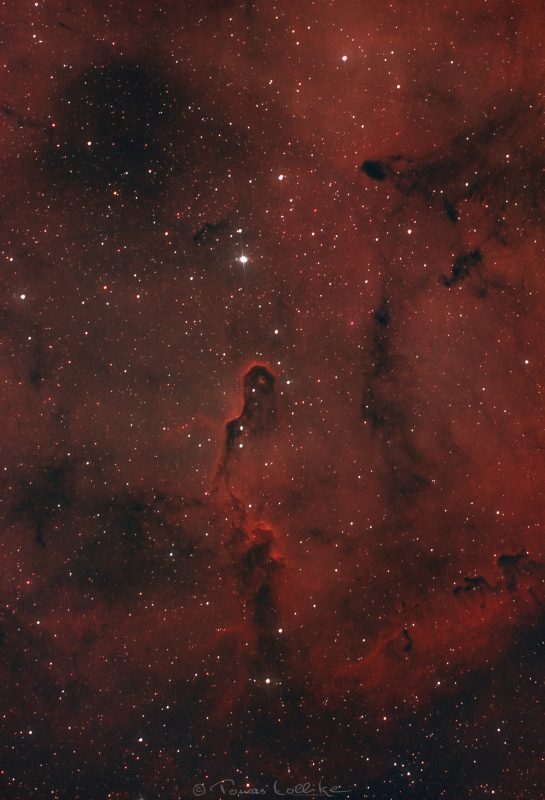 The Elephant’s Trunk Nebula (IC 1396A) is a cloud of interstellar gas and dust approximately 2400 Light-years from Earth.
It’s located in the constellation of Cepheus and is a part of the much larger ionized gas cloud designated IC 1394.

The brightest star in the image (HD 206267 – actually a triple star system) is illuminating the bright rim called “The Trunk” and the star is ionizing the whole region of IC 1396 with ultraviolet light.

Due to the discovery of a lot of young stars in 2003 in this region the area is now thought to be a “star nursery” but also older stars are present; the two most prominent ones have blown a “hole” in the dense nebula, which is called “The Eye of the Elephant”.

The opposing winds and pressure waves from the three huge stars that form HD 206267 and the new young stars have led to densely compressed interstellar gas which has led to both star formation as well as several protostars.
The winds from HD 206267 is measured to 3225 km/s which is the highest measured for stars of this type – these winds are strong enough to strip the nearest stars from their protoplanetary disks (so likely no planets will form around these stars).

Personally, I think the Elephant’s Trunk Nebula much more resembles a woman appearing out of a fog, than an elephant – but hey, that’s just me… 😉