You Are Here: Home / Urban / Champs-Élysées and the Arc de Triomphe, Wrapped 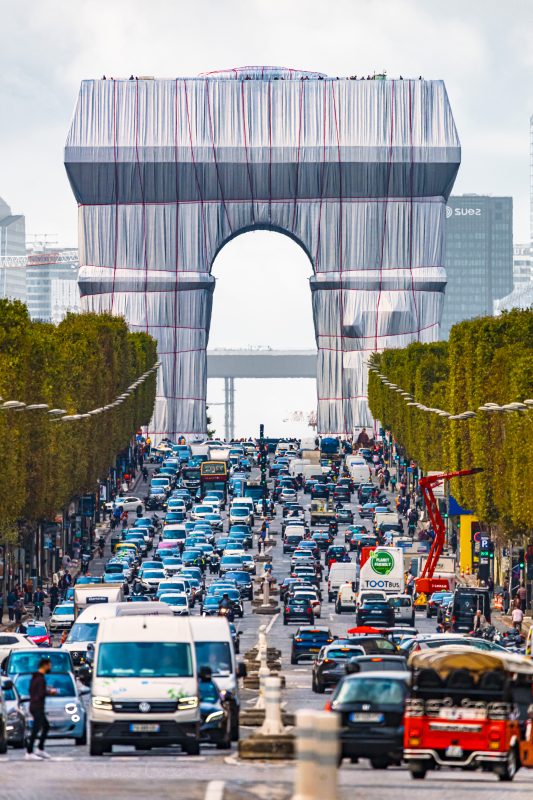 
“Arc de Triomphe, Wrapped” by Christo and Jeanne-Claude was a temporary artwork in Paris from 18 September to 3 October, 2021.

The Arc de Triomphe was wrapped in 30.000 square meters silvery blue recyclable polypropylene fabric and tied up with 7 km of red rope.
The work was self-financed through sales of project documentation, including drawings and models, and the total cost was about 14 million euros.

The planning began in 2018, and was originally planned for 2 weeks in April 2020, but was postponed to September 2020 due to nesting kestrels – and then further delayed a year due to Covid-19.
Sadly, Christo died in May 2020 so he never saw his project finalised – but his team nevertheless decided to cary out the artwork in his spirit and to honor his memory.

Actually, Christo and Jeanne-Claude met and married in Paris in the late 1950s – and in 1979 they started planning to wrap the Pont Neuf, which they were permissioned to do for 2 weeks in August 1985.

The photo was taken from the pedestrian crossing at Avenue Dutuit at a distance of 1,7 km from the Arc de Triomphe.