You Are Here: Home / Startrails / As Time Goes By

As Time Goes By 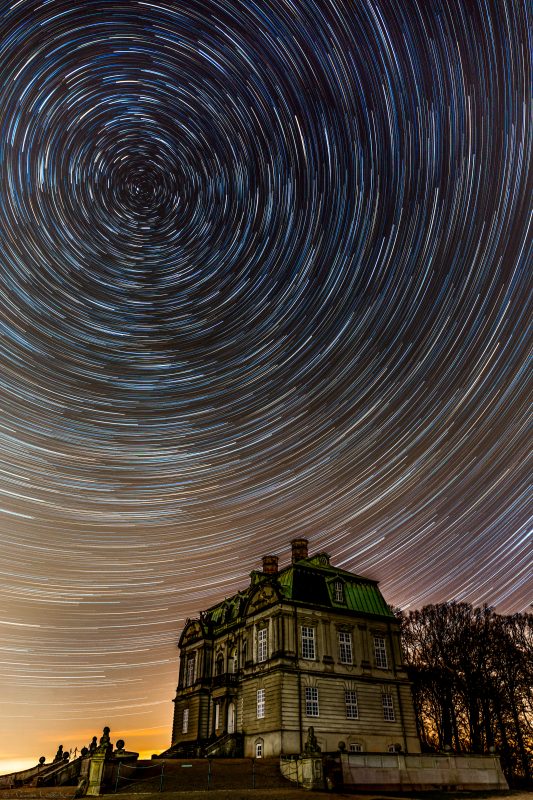 Star trails at the The Hermitage Hunting Lodge.

The Hermitage Hunting Lodge is a Danish royal hunting lodge in Dyrehaven north of Copenhagen.
It was built by Laurids de Thurah for King Christian VI in 1734-36 as a setting for hosting the royal banquets during par force hunting in the surrounding Dyrehaven.

The name comes from the table, an hermitage, which was a table with devices to raise and lower only the parts of the table where the plates were to and from the kitchen in order to dine “en hermitage” (from French meaning “in solitude” – hence without the disturbance of servants in the room).
The plates would be set in the kitchen in the basement and raised via pipes up through the building to the tabletop and vice verse eliminating the need of disturbing (and maybe eavesdropping) servants.

In my opinion probably also a funny show-off trick much in style with King Christian V’s secret music channels on Rosenborg Castle in Copenhagen, where he had The Royal Danish Orchestra playing in the basement and the sound would reach the upper floors through channels in the walls and vents in the floor under the furniture – a both daunting and fascinating experience for visitors to hear music but not see any musicians; an early 17th century loudspeaker 😆

The hoisting apparatus in the Hermitage was unfortunately taken down already in the late 18th century as it was causing endless mechanical problems, and only the loading hole remains in kitchen now.

Various renovations over the centuries were not made in the original style due to cost savings but in the early 20th century the roof was again imbricated with copper and in 1976-1991 the castle underwent and major renovation as well as the interior was completely renovated to its original splendour in 2010-2013.

The castle is now owned by the Danish State and is made available to the Royal Family when they need it – among others for royal hunting and in connection with the annual equestrian event The Hubertus Hunt in November where riders dress up to look like the riding par force hunters of the 18th century (the hunted animals are nowadays also riders, but with foxtails on their shoulder).
The winner’s prize is has since King Christian X in 1940 been given on top of the main stairs – today by HRH Crown Princess Mary.